How to download the Herobrine skin, and Wiki facts about the Minecraft Herobrine character.

Who is Herobrine in Minecraft?

Herobrine is a Minecraft ghost character who haunts the single-player worlds. He looks like a standard Steve, which is Minecraft's original default player skin, but you will notice that he has white white eyes. Herobrine isn't dangerous, but most Herobrine sightings will end with Minecraft players running away in fear.

What is the Story Behind Herobrine?

Herobrine is the center of much speculation and Creepypasta (horror-related legends), with explanations of his origins such as being Notch's dead brother, a ghost, or a revenge character coded by a fired Mojang employee.

How to summon Herobrine in Minecraft

You cannot summon Herobrine in un-modded Minecraft. In order to have Herobrine appear, you must download the Herobrine mod from burnner_, available on MinecraftMods and in the Minecraft Forum. Then, you must craft a Herobrine summoning block, which is a 3x3 grid with Soul Sand at the centre of 8 bone. Then, build a Summoning Totem by placing, vertically, two Gold Blocks down and then the Herobrine Block and a Netherrack block on top. Once you light the Totem, Herobrine will be summoned. 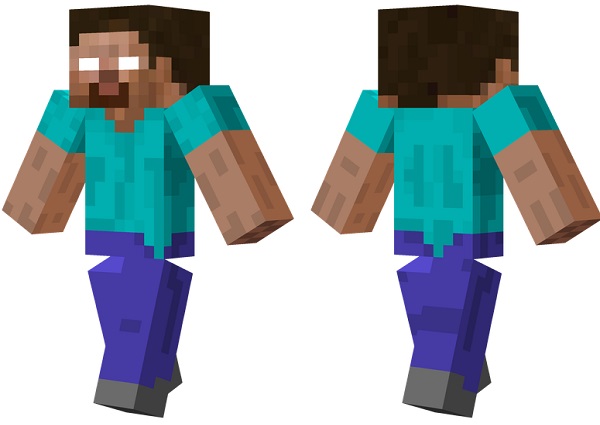 Herobrine is a downloadable skin for Minecraft:

→ or Apply This Skin to Minecraft.net.

This website uses cookies to improve your experience while you navigate through the website. Out of these, the cookies that are categorized as necessary are stored on your browser as they are essential for the working of basic functionalities of the website. We also use third-party cookies that help us analyze and understand how you use this website. These cookies will be stored in your browser only with your consent. You also have the option to opt-out of these cookies. But opting out of some of these cookies may affect your browsing experience.
Necessary Always Enabled
Necessary cookies are absolutely essential for the website to function properly. These cookies ensure basic functionalities and security features of the website, anonymously.
Functional
Functional cookies help to perform certain functionalities like sharing the content of the website on social media platforms, collect feedbacks, and other third-party features.
Performance
Performance cookies are used to understand and analyze the key performance indexes of the website which helps in delivering a better user experience for the visitors.
Analytics
Analytical cookies are used to understand how visitors interact with the website. These cookies help provide information on metrics the number of visitors, bounce rate, traffic source, etc.
Advertisement
Advertisement cookies are used to provide visitors with relevant ads and marketing campaigns. These cookies track visitors across websites and collect information to provide customized ads.
Others
Other uncategorized cookies are those that are being analyzed and have not been classified into a category as yet.
SAVE & ACCEPT